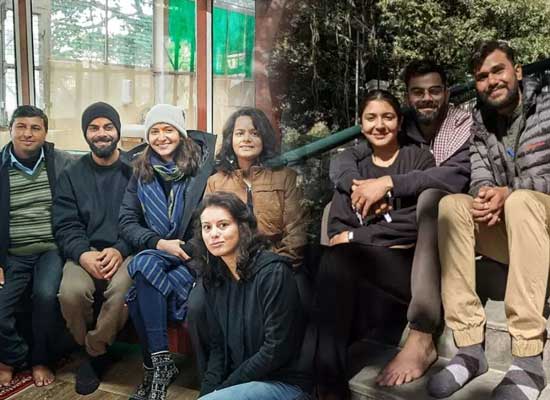 The well-known celebs Anushka Sharma and Virat Kohli are considered to be a power couple for all the right reasons. Devoted parents to their adorable daughter Vamika, the lovebirds always make headlines for their loveable pics that have been taken over the internet.
Recently, both were spotted at the airport jetting off to Uttarakhand with their daughter Vamika.

Now, a new photo of the couple from Uttarakhand is doing rounds on the internet after they sought blessings from a temple named Hanuman Garhi in Nainital. Anushka and Virat even happily posed with excited fans on the way. In the pic, the cricketer can be seen wearing a black sweatshirt, while the Pari actress is seen wrapped up in warm winter clothes-jackets, coats, mufflers, and sweaters. However, their daughter Vamika can't be seen in the photo.

On the film front, Anushka is all set to make comeback with her film Chakda 'Xpress, which is a sports biopic film based on the life of former Indian cricketer Jhulan Goswami and will premiere on Netflix.