Priyanka Chopra gets Nick Jonas' initials in her Mehendi for Karwa Chauth in LA! 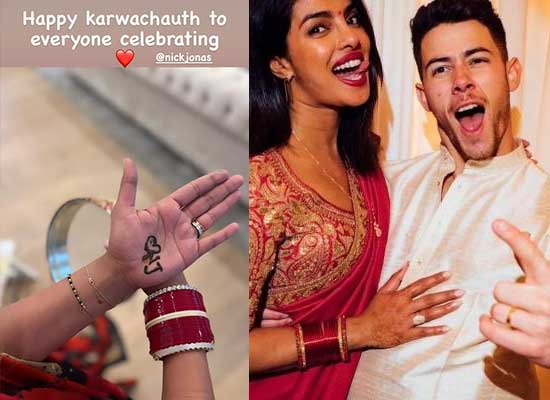 The powerful Priyanka Chopra and Nick Jonas got married in a Christian and a Hindu ceremony in Jodhpur's Umaid Bhawan Palace in December 2018. Both enjoy a huge fan following and are now proud parents to a baby girl named Malti Marie Chopra Jonas.

Recently on Friday, the Fashion actress shared a Karwa Chauth greeting on social media. Taking to her Instagram story, Priyanka, who presently resides in Los Angeles with Nick, posted a pic of her henna-clad hands, in which one can Nick Jonas' initials on her Mehendi. While, in the other hand, the Mary Kom actress is seen wearing chooda and holding a sieve, as she is dressed in a red saree. Sharing the pic, Priyanka posted, "Happy karwachauth to everyone celebrating @nickjonas," she also added a red heart emoji. However, she did not show her face in the picture.