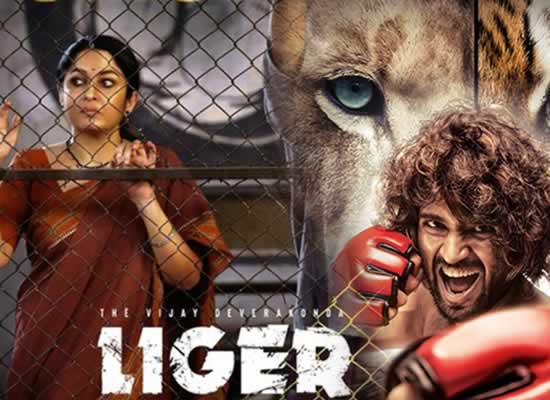 About the story, the main protagonist Liger’s (Vijay Devarakonda) only aim is to become a national MMA champion. Liger (Vijay Deverakonda), whom his mother Balamani (Ramya Krishnan) describes as a crossbreed between a lion and tiger, is good at mixed martial arts (MMA). He and his widowed mom (Ramya Krishna) land in Mumbai from Telangana's Karimnagar to pursue their dream. Liger gets trained in MMA but the twist in the tale arises when he gets cheated on by a rich girl Tanya (Ananya Pandey). The rest of the tale is about how a heartbroken Liger gets back in form and wins the international MMA championship.

About the performances, Vijay Devarakonda does a good job in his role and his transformation looks amazing. His stammering act is little irksome but he manages it well in the second half. Ananya Pandey justifies the role of a rich girl but her character is not carved appropriately. Ramya Krishna as Vijay Devarakonda’s mom is notable in her role and evokes decent emotions. Ronit Roy is inspiring as the MMA coach. Getup Sreenu tries to evoke a few laughs in the first laugh. Mike Tyson appears at the end of the movie and his cameo has been shot brilliantly. All his amusing scenes with Vijay Devarakonda are nice. The MMA fight sequences have been choreographed well in the movie.

About the story, Liger has a weak storyline that does not work. There is no appropriate conflict in the movie and the main protagonist’s journey looks unplanned. The love story is also forced and does not create much curiosity. The story progression in first half is fine with some good songs. There is undeniably no emotional connection in the movie and this is where Liger disappoints.

As we all know that Vijay Devarakonda is known for his free-flowing dialogue delivery but in this film, his stuttering act looks good in the promos but does not gel well in the movie. Maybe it is the main gaffe of Puri to show Vijay as a man with a disability.

About the technical aspects, the production values of the film are OK. The camera work is also remarkable. The music is satisfactory. Back ground score by Sunil Kashyap is unsatisfactory in the first half but was good in the latter part. Director Puri has written and narrated a story in a haste and that is obviously visible on screen. He is famous for elevating his main protagonist’s character but there are not suitable scenes that do such in Liger. On the positive notes, Puri creates a few high moments with comedy and evokes some patriotic dialogues which will work for the masses.

Overall, Liger is OK to watch once for its mass entertainment quotient with Vijay Deverakonda’s amazing transformation for the character.