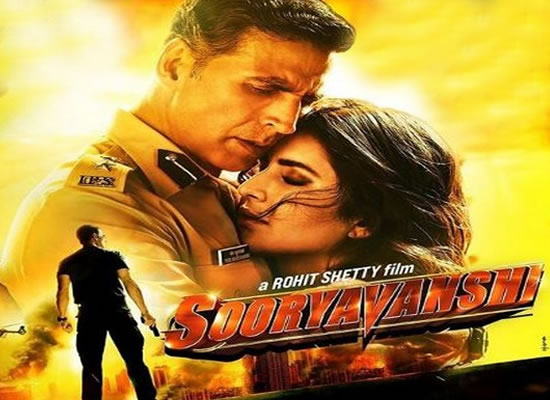 Akshay Kumar and Katrina Kaif starrer actioner Sooryavanshi is another successful extension of Filmmaker Rohit Shetty’s super-cop universe. Sooryavanshi’s character was delicately announced towards the end of Simmba. The movie has all the elements, attitude, style, showmanship and heavy-duty star power expected of a Rohit Shetty offering. Rohit Shetty had designed, conceptualized and executed Sooryavanshi for the big screen.  Rohit Shetty waited patiently for close to two years for cinemas to reopen, so that moviegoers could watch his newest creation on the big screen.

About the story, Sooryavanshi follows DCP Veer Sooryavanshi, the Chief of India’s Anti-Terrorism Squad, as he attempts to protect Mumbai from one of the worst terror attacks in history. The story in film unfolds as the biggest attack is yet to happen in the city, as some sleeper cells from Lashkar have been activated and it is found that 600 kilos of RDX left over from ’93 serial attacks is being used for the purpose. Enter DCP Veer Sooryavanshi, with a solid mission and a lot of valor to protect the city from another big attack. He is so committed towards his duty that even his family, wife Riya (Katrina Kaif) and son Aryan come second to his mighty task at hand.

On paper, the plot of film may sound predictable and done to death, but it’s triumph lies in its screenwriting. The screenplay is truly gripping for most parts, although it loosens in the first half due to an undesirable song and some romantic scenes filmed on Akshay and Katrina. Rohit integrates drama and emotions beautifully with remarkable action.

About the performances, evergreen star Akshay Kumar returns to the action genre with Sooryavanshi. He indulges in fistfights, spews fire and venom, pumps bullets, vanquishes the villain and romances Katrina. Finally, he delivers a knockout performance. Katrina Kaif looks stunning on screen and her sensual moves to the iconic song ‘Tip Tip Barsa Paani’ is undoubtedly praiseworthy. Katrina has a decent role and she goes through it with ease.  The ensemble cast, which includes Jackie Shroff as the leader of terrorist gang Omar Afeez, as well as other group members Gulshan Grover, Abhimanyu Singh, Kumud Mishra and Nikitin Dheer, makes a significant contribution to the plot's progression. Jaaved Jaaferi's portrayal of ATS head Kabir Shroff, on the other hand, flawlessly plays his serious cop part.

The presence of Ajay Devgn and Ranveer Singh is really a master stroke. Their sequences only enhance the post-interval portions to a major extent.

The background score of Sooryavansi sets the mood and about the song, the trio Akshay Kumar, Ajay Devgn and Ranveer Singh’s dancing on Daler Mehndi’s ‘Aila Re Aillaa’ is entertaining.

Overall, film Sooryavanshi is praiseworthy to watch once for its entertainment quotient and new super-cop Akshay Kumar’s high-octane action scenes.