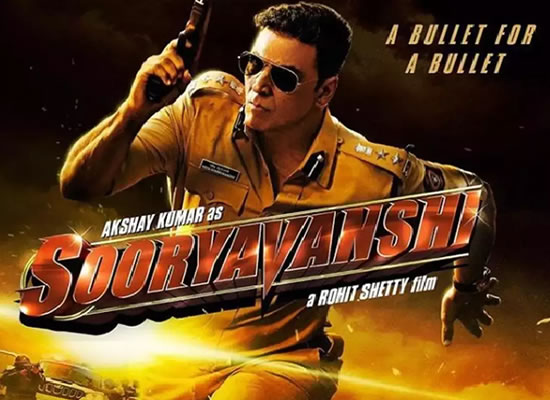 Rohit Shetty’s next super-cop adventure is back in the form of Akshay Kumar and Katrina Kaif starrer ‘Sooryavanshi’. As anticipated, filmmaker has compiled a high decibel commercial tuneful soundtrack for his next super-cop actioner. For the soundtrack, he is mainly banking on the remake & production mammoth Bagchi for delivering three major remakes in the form of Aila Re Aillaa, NaJaa and Tip Tip. The music is a compilation of a number of singles picked across many artists and one can expect some big songs as Shetty always delivers some really popular songs with a mass appeal in his big budget project.

The very first song Aila Re Aillaa is well done reinventing Kumar’s 2010 song with some attractive new lyrics by Shabbir Ahmed and powerful vocals by Daler Mehndi.
The next one is the best song which is the original romantic Mere Yaaraa by Jam8 with Arijit Singh and Neeti Mohan’s vocals and Rashmi Virag’s lyrics delivering an evocative number.

In the very next, Tanishk Bagchi does well on the Punjabi song’s remake with Najaa that has some brilliant vocals by Pav Dharia and Nikhita Gandhi and great new Hindi lyrics.

The next song Tip Tip is almost basic sticking to the strength of the original sex appeal of the song with Udit Narayan and Alka Yagnik’s vocal magic brought back.

Lijo George  - DJ Chetas delivers the theme music "Sooryavanshi Theme" well to sum up the album ending it with yet another mass appeal song.

On the whole, the music of Sooryavanshi delivers well as per expectations and supportive to narrative. Commercially each single has some mettle to it and will enjoy success.