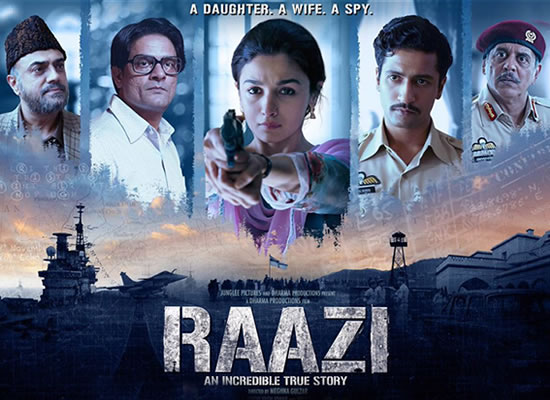 Vivacious actress Alia Bhatt's next is Raazi. Alia Bhatt is going to team up with producer Karan Johar again and firs time with director Meghna Gulzar. Gulzar and Shankar-Ehsaan-Loy’s creativity and innovation are coming together for Raazi’s soundtrack.

The album begins with Arijit Singh and Sunidhi Chauhan’s solo version with 'Ae Watan'. This is a number which associates with a national anthem or a morning assembly number in schools. 'Ae Watan' is a patriotic number. 'Ae Watan' does make an instant impact due to its genre. I is quite catchy and tuneful number.

The very next song is 'Dilbaro' which has a team of Harshdeep Kaur, Vibha Saraf and Shankar Mahadevan to create something special. In this song, Alia Bhatt is remembering the ones near and dear to her. It is a situational number.

The album ends with song Arijit Singh’s 'Raazi'. It is also a situational number. This one isn't really a hardcore Bollywood soundtrack. It is tuneful and able to support narrative.

Overall, The Raazi’s soundtrack is fair enough and support to narrative as per situations. Song Ae Watan is patriotic and tuneful.