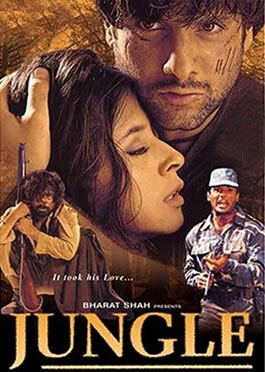 A survival tale of two lovers, who tries their best to escape a jungle which is governed by a cold blooded dacoit.

Anu Malhotra (Urmila Matondkar) and Siddharth "Siddhu" Mishra (Fardeen Khan) are in love with each other and would like to get married. Anu is ready to inform her parents about her future life-partner, but everything is put on hold, as the family decides to go out on a group safari-like expedition. Siddhu decides to go incognito also. The group gets to view wildlife from fairly close distances.

Tragedy strikes when the group (except Siddhu) is kidnapped by the Bandit Durga Narayan Choudhary (Sushant Singh) and his gang. The bandits commit atrocities on the kidnapped people and finally behead one of the women in order to terrorize the government and extract ransom as well as release of one of their men who is in police custody. Once their demands are met, the bandits release remaining hostages, except Anu, whom the chief Durga Narayan Choudhary has started liking. This is unacceptable by his girlfriend Bali (Kashmera Shah), the only female bandit of the gang. When Siddhu does not find Anu among the released hostages, he sends the illegal arms supplier Dorai (Makrand Deshpande) to request Durga Narayan Choudhary for Anu's release. He secretly follows Dorai and finally reaches Anu. In the ensuing commotion, he is able to run away with her, with the bandits in their pursuit. They keep searching their way out of the dense forest.

Meanwhile, the goons started to reduce in numbers as they get shot one by one during repeated police encounters. Finally, Durga is the only one left. Still mad about Anu, he searches for her. He is about to take Anu away once more but is intercepted by Shivraj (Sunil Shetty), whom he eventually murders, but finally Siddhu beats up Durga and he is arrested. He re-unites with Anu and the movie ends on a happy note.