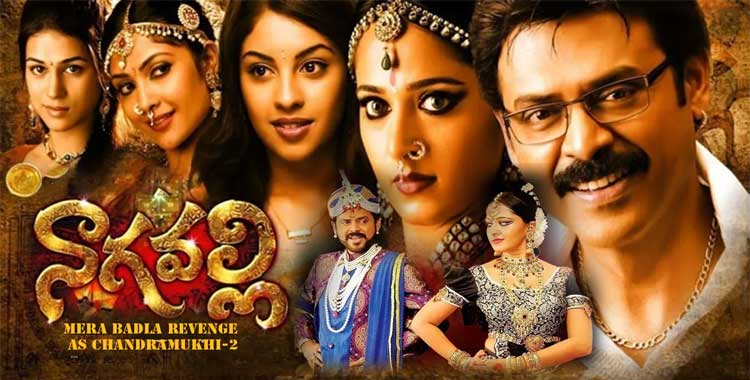 An ancient painting of Chandramukhi, alias Nagavalli, is distributed as a prize to Bharatanatyam dancer Gayathri, her husband, and her family.

Plot: An ancient painting of Chandramukhi, alias Nagavalli, is distributed as a prize to Bharatanatyam dancer Gayathri, her husband, and her family. Gayathri lives in Tirupathi with her husband, father Shankar Rao, mother Parvathi, sisters Geetha who tries to repaint the original portrait of Chandramukhi as a part of her painting hobby, and Gowri, maternal uncle Appa Rao, his wife, and maternal cousins Pooja and Hema.

A few years later, Gayathri and her husband are shown to be dead. Gowri, the youngest of the three sisters is engaged to be married and on the day of the wedding, one of her friends faints upon encountering a huge snake, and the bridegroom calls off the wedding after fearing something. The members of the family are affected by the presence of Chandramukhi's painting. so they contact Acharya Ramchandra Siddhanthi. The Acharya takes the help of Dr. Vijay, a psychiatrist, and assistant to Dr. Eshwar to solve the problem. All directions point to the portrait of Chandramukhi to be the cause of the problems in the Rao household. The Acharya says that it is the same painting that has resurfaced from another house, where Vijay's mentor Dr.Eshwar, and the Acharya had first come across this problem and solved it five years ago. One night, Dr. Vijay goes to the outhouse as he hears anklet sounds and finds that Gayathri is still alive but became mentally disturbed after the accident in which her husband died. It is revealed that the family decided to hide Gayathri from the public, fearing that Geetha and Gowri would not get prospective suitors for marriage. Suspecting that Gayathri is the one possessed by Chandramukhi, the Rao family along with Vijay and the Acharya, take her to a nearby temple where they find strange paranormal occurrences but fail to exorcise her.

Vijay starts to investigate the history of Chandramukhi. It takes him back to around 125 years when a king, Raja Sri Sri Sri Nagabhairava Rajshekhara had chanced upon a beautiful dancer Chandramukhi, also known as Nagavalli. Vijay learns that it was Nagabhairava who usurped wealth and kidnapped Chandramukhi from a Tamil kingdom and not his brother Venkatapathy Rajashekara as believed by many. Nagabhairava is smitten by Chandramukhi, but before he could do anything about it, he finds her with her lover Gunasekar and in a fit of rage, kills them both. He also orders that any virgin woman in his kingdom should be exiled or he would kill them. But his subordinates and the people of his kingdom gather against Nagabhairava and plot to assassinate him for all his wrongdoings. Nagabhairava escapes and no one knew if he is still alive or dead. Vijay also finds that someone else is also investigating the history of Chandramukhi simultaneously and gets to know that it could be the woman that is possessed by Chandramukhi.

Vijay finds that Nagabhairava is still alive with his astrological profile and deduces that he could live like a sage using black magic. His assumptions are right when he finds the old & crumpled Raja is alive in a cave. Meanwhile, the Acharya still believes that Gayathri is the possessed woman and tries to exorcise her with pooja and mantras. Vijay tells that she isn't possessed but is just mentally disturbed and cures her post-traumatic disorder successfully and reveals to everyone that Gowri is the one affected by Chandramukhi and proves it. They find that Gowri was in a fragile mental state due to Gayathri's trauma and a close friend's death and did research about people who live for long when she came across the legend of Chandramukhi and Nagabhairava and empathizes with their story. She tries to learn more about Chandramukhi and Gunasekar and eventually gets a personality disorder, also called possession by Chandramukhi. Vijay tells a possessed Gowri that Nagabhairava is still alive and sees her transforming into a rage-filled Chandramukhi. She goes to the cave to kill Nagabhairava. Vijay follows her where they have a battle with him, and as Nagabhairava uses his sword to behead Chandramukhi, a bolt of lightning strikes the sword, and it reduces him to ashes. Chandramukhi leaves Gowri as she has sought her revenge and finally everyone is at peace.