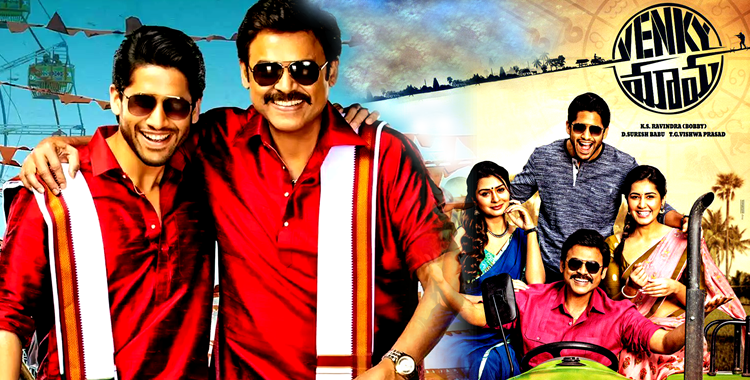 A story of nephew and a son which revolves around their emotions and village drama and army based story.

The film begins at Draksharama where a well-known personality Ramanarayana, an astrologer, lives with his wife Lakshmi and son Venkatarathnam. Ramanarayana opposes his daughter's marriage, as he foresaw the couple's death, soon after, a year of their son Karthik’s birth. Just like Ramanarayana predicted, Karthik loses his parents in a tragic accident. Here, Ramanarayana warns that the kid also brings bummer to his family and suggests to hand him over to his paternal grandparents. However, Venkatarathnam / Venky Mama denies it and rears his infant nephew with care and affection, even omitting his goal of enrollment in the army.

Years roll by, and now the scene shifts to Kashmir where Venkatarathnam is under the search of Karthik, who left home without informing. Immediately, Venkatarathnam steps into army protected area and get prosecuted when he tries to convince the army officers regarding Karthik. However, they affirm the absence of such a person in their regiment, but Venkatarathnam persists to meet him. So, he starts narrating their story. After completion of engineering, Karthik disdains various jobs because he prefers to stay behind his uncle. Nevertheless, his grandfather always needles. Later, Karthik realizes that Venkatarathnam has forsaken his marital life for his nurture, so he determines to get a perfect match for him. Just as, he is acquainted with newly appointed Hindi teacher Vennela and strives to develop intimacy with her, which she misunderstands. Besides, Karthik's ex-lover Harika, daughter of malicious MLA Pasupathi arrives at the village. Thereupon, Venkatarathnam learns their love affair and chases Harika to seek the reason behind their break up which too, misfires. Right now, Karthik succeeds to make Vennela fall for his uncle. Parallelly, Venkatarathnam also knows from Harika about their detachment is of Karthik's prioritization to his uncle than her and his life. Being cognizant of it, Venkatarathnam decides to disentangle with Karthik and send him to London. At that point, Karthik proclaims that nobody can divide him from his uncle, including him. Overhearing their conversation, Harika repents and understands Karthik's virtue.

Afterwards, Venkatarathnam approaches Pasupathi with the marriage proposal. At that moment, Pasupathi bids to aid Venkatarathnam in the upcoming election because his word is an ordinance to the public in the area. Anyhow, the plan back-pedals when Venkatarathnam spares and ignominies him. All at once, an enraged Pasupathi ploy to slay out Karthik when Venkatarathnam shields him. During the interval, as a flabbergast, Ramanarayana asserts that according to Karthik's horoscope, he is born to kill his maternal uncle and the only redress is to split them. Listening to it, Venkatarathnam and Karthik refuse to accept it. But unfortunately, the word befalls as several incidents which make Karthik realize and leaves the house for the protection of his uncle. After three years, Ramanarayana announces the actuality of Karthik's presence in the army to fulfill his uncle's ambition. Momentarily the story shifts to the present when Venkatarathnam ascertains that Karthik is seized as a hostage by the terrorist to stand-off for their leader who is already dead. During that plight, Venkatarathnam determines to swap as the terrorist in the know that it is a suicide mission to him. By the time of hand-off, due to Karthik's horoscope, he fires Venkatarathnam oversight him as a blackguard. At last, Karthik saves his uncle from the deathbed with his idolization confronting the horoscope. Finally, the movie ends on a happy note with uncle & nephew pairing up with their love interests with an axiom that horoscope is just a belief but love is a reality.