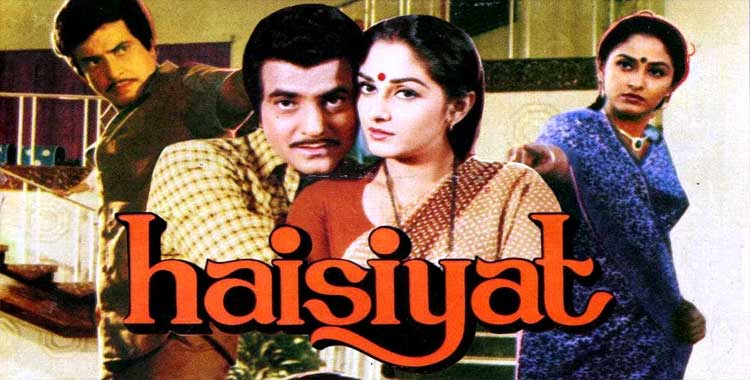 A union leader marries his employer, but subsequently gets embroiled in labor/management disputes.

Haisiyat is a 1984 Hindi-language drama film, produced by Srikanth Nahata under the Vijayalakshmi Pictures banner and directed by Dasari Narayana Rao. It stars Jeetendra, Jaya Prada in the pivotal roles and music composed by Bappi Lahari.

Plot: Ram is a trade union leader who is an activist for workers' rights. In his factory, the employees are ailed under the clutches of deceitful Manager Ravi. Heart-stricken workers decide to strike but Ram withholds them until the arrival of its proprietor. Seeta a strict & disciplined lady returns from abroad. Buy crafty Ravi induces her against them who neither gives an appointment. Meanwhile, Ram & Seeta are acquainted as unbeknownst and fall in love. After a while, the truth comes forward when Ram denies her proposal because of the status barrier. At that point, Seeta solves the puzzle by assuring that they will play the duel as a worker & a proprietor in the factory and at home as a beloved wife & husband. Thus, they knit and lead an ideal life. Afterward, Seeta is elected as Chamber of Commerce president when a conflict arises between capitalism & laborism regarding bonus. As a result, Ram & Seeta moves to two opposite poles. Anyhow, Ram triumphs the victory with his hunger strike which hurts Seeta's self-respect and declares lockdown. So, Ram files up a case, and the court verdicts in favor of the workers. Here, the cleft between the couple summits, so, Seeta avenges against workers. Exploiting it, Ravi misleads and kidnaps her when workers rescue her. At last, Seeta realizes her mistake. Finally, the movie ends on a happy note with the reunion of Ram & Seeta.