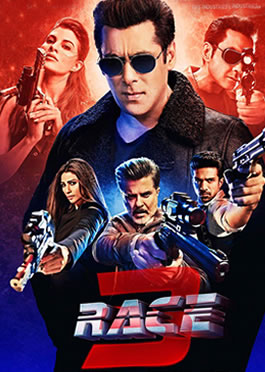 Relationships and loyalties of a criminal family planning its next big heist are tested when some shocking revelations strike them.

Shamsher Singh owns a private island, Al-Shifa, for trading arms. Sikander Singh is Shamsher's step-son, while Sanjana and Sooraj are his twin children. Yash is a close associate at Shamsher's empire and Sikander's confidante, and Raghuvendra "Raghu" Singh, is a bodyguard and close confidante to Shamsher. In a flashback scene, it is revealed that Rana Singha is Shamsher's business rival, and he creates problems for Shamsher's family business. As Sanjana and Sooraj reach 25 years old, their family lawyer explains their deceased mother's will. As per the will, the twins are entitled to 50% of the property as joint partners (25% each), and the remaining 50% for Sikander. This disparity causes the twins to hate Sikander even more as Shamsher preferred Sikander more than the twins. Shamsher tells both of them that Sikander is the son of his elder brother Ranchor Singh.

In a flashback, that portrays the Handia village of the 1970s, the history of the Singh family is depicted. Both the Singh brothers used to supply weapons to Indian army. Local politicians of Handia asked them for illegal weapons, to which Ranchor refused. His refusal caused a rivalry with a local politician, Gajendra Pathak. One day, during an ambush on an arms truck which was owned by Ranchor's company, Vijendra's son Narendra was killed by Ranchor. Then Ranchor died when his car was blown-up by a bomb. The arms company owned by the Singh family was then declared to be an anti-state organization and accused of supplying weapons to terrorists. Shamsher sent Sikander to Beijing for studies and took Sikander's widowed mother Sumitra to Al-Shifa. After a year, the twins were born.

In present day Al-Shifa, one night, Yash talks about his girlfriend. Sikander reveals that in Beijing, he fell in love with a girl named Jessica who severed ties with him. Shamsher's childhood friend Brijmohan tells him that his friend's hotel was used by politicians for their lascivious motives where all the activity was captured on a spy video camera and stored on a hard disk. The hard disk was kept in a bank locker in Cambodia. Shamsher appoints Sikander to recover of the hard disk, and he promises to get the disk. The next day, during a party, it is revealed that Jessica is actually Yash's girlfriend. Sikander and Jessica meet privately in the security room. The next day, Sooraj and Sanjana, who had recorded the Sikander-Jessica meet, screen the video to Yash. A furious Yash goes to Jessica's apartment and finds Sikander present with her. Sikander later tells him that both of their past interactions with Jessica were planned by Sooraj and Sanjana, as part of their plan to destroy Sikander. Yash teams up with Sikander against the twins but pretends to be with the twins as well. Sikander, the twins, Yash and Jessica, execute the mission to recover the hard disk.

After retrieving the hard disk, Shamsher eliminates Sikander by planting explosives in his car and heads to a conference with the politicians whose objectionable videos were stored on the disk. Shamsher tells of Sikander's death to the politicians, in the presence of the twins. He then plugs the hard disk and is shocked to find out that the disk was not the original one. Rather, it only contained a video, self-filmed by Sumitra before her death, in which she reveals the truth that Ranchor was killed by Shamsher, and the twins were Ranchor's kids. Sikander arrives, and reveals that he knew that Shamsher killed his dad, but kept it a secret for ten years and had been pretending to be loyal to Shamsher. Shamsher reveals that Yash is his real son to the twins before beating them up and before Sikander's arrival. After a fight in the desert between Sikander and Yash, Sikander demolishes Shamsher's entire army and makes both Yash and Shamsher surrender to Jessica who happens to be an Interpol officer. The arrested father-son duo are flown to their native village Handia.

In the climax, Sikander reveals that he had been planning events along all and revealed all the plans and secrets to the twins and Jessica. Shamsher is seen bribing a police officer during jail proceedings, while Yash is seen to be toning his body inside the prison cell. Sikander, reuniting with his twin siblings in Al-Shifa, reveals the plot of handing over the original hard disk to Jessica. Sikander makes a metaphorical statement regarding the "Tiger" of a new race.