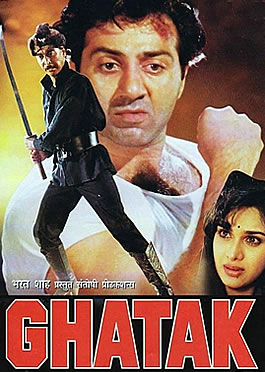 Unable to witness the injustice and brutality inflict on the residents by a tyrannical gangster, Katya, in a small Indian village in India; Kashinath alias Kashi decides to single-handily take a stand to fight for his and the villagers rights.

Kashi (Sunny Deol) is a kind-hearted wrestler and the dutiful adopted son of Shambhu Nath (Amrish Puri) living in Banaras. Shambhu Nath, who was a freedom fighter awarded with Tambra Patra, is an honourable and respectable man in town. Kashi comes to Mumbai with his father for his medical treatment for his throat and stays with his brother Shiv Nath (K. K. Raina). Kashi meets Gauri (Meenakshi Seshadri) and starts liking her. He learns that the colony is being terrorized by a tyrannical gangster named Katya (Danny Denzongpa) along with his other six brothers. Before Kashi's arrival, a resident named Sachdev (Om Puri) tries to initiate revolt against Katya, but gets ruthlessly killed by him, thereby making Malti (Ila Arun), wife of Sachdev, go mad. Katya and his brothers become enemies with Kashi when he beats up their goons when they were beating up Malti. Shambhu Nath is later diagnosed with throat cancer and has only a few days to live.

When Kashi refuses to be a member of Katya's gang, Katya becomes ferocious and makes Shambhu Nath a dog in front of the entire society. After a series of dramatic events, Shiv Nath is murdered by Jeena (Mukesh Rishi), one of Katya's brothers. Kashi then kills Antya (Deep Dhillon) and gets arrested. Meanwhile, Shambhu Nath dies of cancer. When Kashi was going to disperse his father's ashes at the Ghat with the police, the police van gets attacked by Katya's brothers and goons. Kashi kills all of them, including Katya's three brothers, and reaches Katya's home. There he kills Jeena, thereby causing only two brothers to survive, including Katya. As Katya made Kashi's father dog, he made Kashi as an ox and takes him to the colony to re-establish his supremacy. But Kashi stands up, and Katya's entire gang is then attacked by the residents. The sixth brother Bhiku (Tinu Verma), is then killed by the mob. Kashi makes Katya a dog and asks him to bark. Katya, having no choice, barks on Kashi's instructions. Kashi then kills Katya, and the colony gets freedom from his tyranny.